Incidentally this page may take a while to load, but I hope its worth the wait...?

In the dining side of the kitchen, Pride of place goes to my BAIRD 702. This turned up in Macclesfield and needed little more than colour reconvergence and grey scaling. The tube's a bit low but it does have a reasonable picture.
I have the original purchase doccuments and service data to go with this set, and it actually won an award from a local TV shop as the oldest working TV in the town!!!! 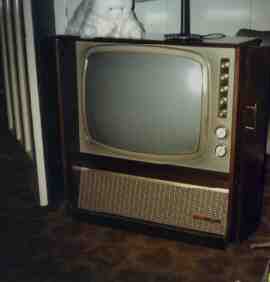 The other set in the kitchen, pictured below,also has a pedigree.
It arrived following a tip off from a collectables shop in Liverpool. It is a HMV set fitted with the B.R.C. 950 Chassis. The lady who runs the shop tells me that it came from a house clearance they did at Edwina Currie's mother's house. This old lady gave the lads that went to do the clearance a tip - 4 cans of Guinness. The house clearance was done in 1996. The sell by date on the cans was 1989... 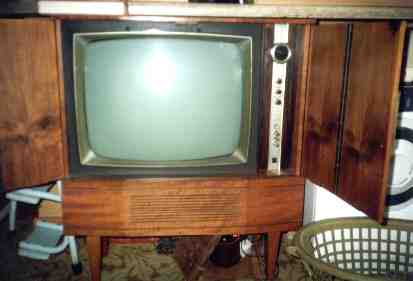 The bedroom houses, among many others not yet photographed for this page, a genuine Philips G6. This again had convergence and grey scale problems, but the CRT was in better health. I was lucky in that the guy who sold it to me had used it regularly, every day!! They don't make them like this any more do they...? 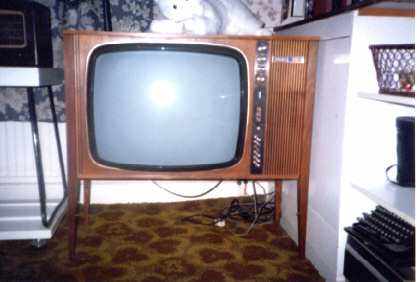 We even have Tellys in the hallway. This is a Bush T115. It is what I call 'Semi Dual-Standard' as it has a VHF tuner but the timebase stages are switchable between 405 and 625 line scanning. Although it runs OK on 405, it has Bush LOPT disease and the LOPT overheats on 625. It turned up in a junk shop in Central Liverpool, and the main fault was a cracked and lost vaccuum EY87. A replacement valve restored pictures and a few new capacitors on the Frame Stages brought the scan to full screen and decent linearity. 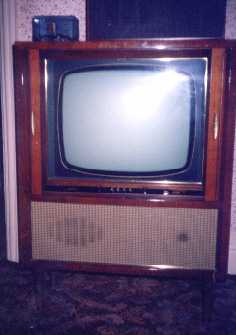 Another Bush Set.... This is a TV53 Single Standard 405 Line set. Note the distinctive shape of the CRT. This set came from a friend in Blackpool and we didn't even stop to see the lights....! Bush sets of this era were made in Bakelite and Wooden cabinets. Its inteseting to note that the bakelite sets were the cheaper ones then... how things can change!!!!!

Here is the Bakelite Counterpart from the same era, the Bush TV62. This came from a RadioPhile auction and was one of my most expensive buys! There is a 3 inch wide raster however.... needs a lot of work. Looks good though!! Incidentally, Model numbers ending in 2 were bakelite. Models ending with a 3 were wooden. 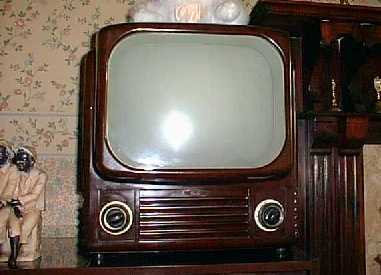 Pride of place in the Front Room, my latest and so far greatest restoration project. This is a BRC2000. Although it is a Dual Standard Colour set, as it is our main set I have replaced the system switch on the line timebase board with wire links and the set is now used as a single standard set. These switches tended to arc and jam...
I got this from a fellow collector, and it did need a lot of work to get going. I started with a black cylinderical capacitor replacement session and then onto the power supply and regulator board, before resurrecting the Line Timebase and EHT Generator panels. There's a write up on this job in the 41st issue of 405 Alive, Summer 1999, and this article has now been posted on this site.

Here's a rare sight. Not the white cats (E-Mail me if you really want to know!) or the 1930's Opium Pipe (or 'Bonger', which I haven't yet tested!!) but the Philips K70. This is circa 1970 Swedish Import that is not exactly unlike the G6. It has two PL509s in parallel on the Line Output, which is in itself a rarity. Note the electronic tuner and attractive cabinet.
This turned up in Dudley, Birmingham. An 80 year old lady had polished it daily but not used it since 1982. After all this time, she just turned it on. After I'd crawled out from behind the sofa, it had come straight up!! It does however have a convergence problem due to noisy pots. 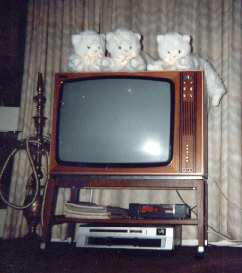 There's a puzzling video fault on this Philips 320 Series set. Not the 'picture' of Mikey Bennett and myself on the screen, but the lack of a raster despite the presence of EHT, etc. I'm working on this at the moment and hope to have a real picture on it very soon!

This Bush TV125 has been in the family ever since she was born back in 1964. First bought by my Aunt in Burton-Leonard in 1964, the LOPT failed in 1978. In storage until 1995, I now have a lopt for this set, and am now trying to pluck up courage to perform a serious operation on a family heirloom...! 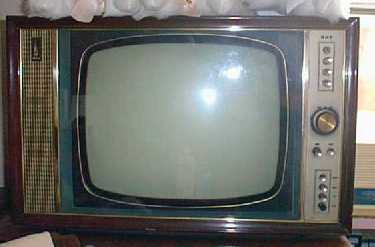 The interesting thing about this set is that it has had a narrow escape. I was given this by Gary Platten from Hartlepool. He dropped it down a flight of steps and it arrived here with a split and dented cabinet. However with the cabinet rebuilt and the various faults (such as a 50 Ohm smoothing capacitor) resolved, this Defiant-Badged Bush TV161 works well! I wonder if his wife has forgiven him for damage to the paintwork yet. The cat that he tripped over escaped without injury!!