This section explains the working of colour tubes and will (I hope!) help you to determine tube problems.

The Colour tube basically creates 3 pictures, one of each primary colour: Red, Green and Blue. Most early tubes were of the shadowmask variety. These have phosphor dots on the screen, red phosphors, green phosphors and of course blue phosphors.

There are three guns in the tube neck: one for each colour. In Delta gun tubes (such as the A56-120X used in the BRC3000) these are arranged in a triangle. In PIL (Precision in Line) tubes, they are in a horizontal line.

All the emission from the Red Gun must land only on Red Phosphors, similarly the Green Gun's emission must only hit Green Phosphors and of course the Blue Gun's emission is only intended for Blue Phosphors. At the screen end of the CRT, the shadowmask is employed for this purpose and magnets on the tube neck assembly direct the elecron beams from the three guns accordingly.

Sometimes, this does not happen and the picture becomes IMPURE. The causes of this are misalignment of the magnets above, which are the PURITY magnets, a magnetised Shadowmask or a damaged or bent shadowmask .

The shadowmask is kept free from magnetic charge by being demagnetised every time the set is switched on from cold. There is a black coil wound around the tube, this is the DEGAUSSING coil. It is connected across the mains via the DEGAUSS thermistors. (In more modern sets, these thermistors are replaced by a less reliable little white thing called a Posistor!). This arrangent, which makes a brief buzzing noise when the set is turned on, keeps the tube's shadowmask demagnetised.

This should in most cases cure the problem. If not, repeat the procedure until no further improvement can be made, then proceed to the purity adjustments.

In some cases, the shadowmask becomes excessively magnetised. When this problem occurs, the tube is demagnetised with an external degaussing wand. This is basically a large coil wired across the mains. It should never be left plugged in when not in use. To use first switch on the TV set, display a pure red raster, position it well away from the set, switch on, bring slowly towards the screen, and then draw a figure of eight over the tube face. Don't let the pretty coloured display put you off. Withdraw slowly back from the set, continuing this figure of eight motion. When you're far enough away for there to be no visible effect on the picture, back off a little further and then switch off the degaussing wand.

If this does not completely cure the problem, repeat the procedure above until no further improvement can be made, then move on to purity adjustments on the CRT neck.

***NOTE***
Never swtich on or turn off the mains to the degaussing wand when it is near the set. This can MAGNETISE the shadowmask and make matters WORSE!

The Purity magnet adjustments can be found on the tube neck. The procedure for adjusting these will be in the set's service manual. Just as an example, on the BRC3000 series, it involves loosening the two wing nuts on the side of the tube neck assembly and then adjusting them for correct purity in the centre of the screen. They are then pushed forwards together until the whole screen is (should be!) pure. Other sets use purity rings on the tube neck. There is a typical tube neck assembly shown below. 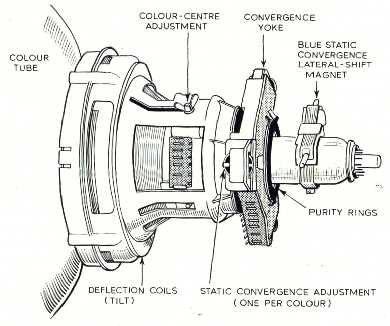 The purity rings are magnetised as shown here. 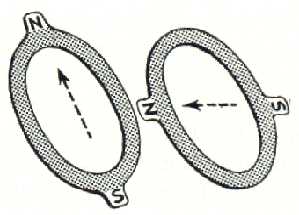 Finally, if you're very unlucky, the shadowmask could be bent or damaged. In this case, you have two choices: One is to just get it as good as you can, the other is to get a new CRT.

This is where all those controls on the convergence panel come in. I gave a basic explanation of how to converge a tube under 'The Basics'. The main premise on both STATIC (Centre of screen) and DYNAMIC (The rest) convergence adjustments is to converge Red and Green to create the secondary colour YELLOW, and then to marry the blue up to this.

The aim is to perfectly (sic) superimpose all three primary coloured displays to create a crisp, sharp colour picture. With the colour turned off and the brightness low, there should be no colour fringing. Misconvergence can look rather like a badly printed colour newspaper.

Fortunately, the circuitry on a convergence circuit is relatively easy. If a control seems to be inoperative, the problem is usually the control itself (especially the wirewound pots) or a component associated with it alone. If two controls or more are inoperative or won't set up, look for a common denominator on the circuit.

COLOUR PROBLEMS ASSOCIATED WITH THE CRT